“Shot to Death With Musketry.”

On April 29, 1864, at Williamsburg, Virginia, Brigadier General Isaac J. Wistar’s brigade lined up to witness the execution of two deserters, Private Owen McDonald and Private James Scott. McDonald, who was twenty-nine-years-old, had been born in England, and had enlisted at Concord, New Hampshire, on November 11, 1863. Scott, who was twenty-two, had been born in Scotland, and had enlisted on November 30, 1863, at Nashua, New Hampshire.  Both men had gone to the front as substitutes, called up after Lincoln’s October 17 requisition for 300,000 volunteers. Within weeks of their muster, McDonald and Scott arrived at Point Lookout, Maryland, and there, they found themselves assigned to the 12th New Hampshire, a regiment performing guard duty over Confederate prisoners of war.


In early April, the weather warmed up and orders arrived, transferring the 12th New Hampshire and its sister regiment, the 2nd New Hampshire, to a new post. For McDonald and Scott, the possibility of wasting away the war as prison guards suddenly evaporated. They knew that if they stayed with their companies—G and K—they would surely see combat. Apparently, other recently-added substitutes possessed the same feeling of foreboding. Over the course of the next week, 100 men deserted from the 2nd and 12th New Hampshire regiments. McDonald deserted on April 9, and Scott joined the exodus on April 10. Somehow, after bolting, McDonald and Scott met up, and they, in turn, joined with another deserter, Private Henry Holt of Company F, 2nd New Hampshire. Together, these three men stole a boat from a St. Mary’s County waterman and used it to row up the Chesapeake Bay—a reckless plan, in my humble opinion. On April 12, several hours into their bid for freedom, a ship heading south from Baltimore, USS Mystic, stopped and overhauled them. After questioning them, the captain determined them to be deserters. As it happened, USS Mystic had charted course for Whittaker’s Landing, a wharf on the James River just south of Williamsburg. 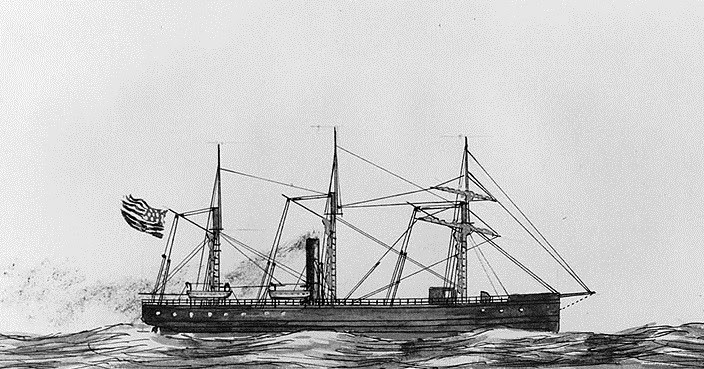 (Here, you can see a sketch of USS Mystic, the gunboat that caught the three New Hampshire deserters.)
On April 11, while the three deserters were still searching for a boat in which to make their escape, the soldiers of the 12th New Hampshire piled into a steamship, the Thomas Morgan, and sailed down the Chesapeake Bay, landing at Yorktown in the afternoon. The next day, the regiment marched to Williamsburg. The regiment had barely paused when USS Mystic arrived at the dock. Thus, within three days of their escape, James Scott and Owen McDonald returned to their regiment in chains.

The New Hampshiremen’s new brigade commander, General Wistar, hated bounty jumpers, and he believed that these three deserters represented the worst of the bunch. Wistar ordered two joint courts-martial to punish them. In order to test the mettle of his two New Hampshire regiments, Wistar selected officers from the 2nd and 12th New Hampshire to render judgment. If the New Hampshire officers elected to punish their own, it would send a clear message to all others who contemplated desertion. 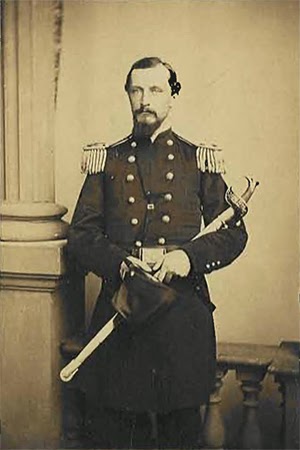 (Brig. Gen. Isaac Jones Wistar demanded courts-martial for the three deserters, and for a fourth deserter caught during the same week.)


Within hours, the court convened and issued its first verdict, finding Private Holt guilty of desertion. At the same time, tt also found another soldier guilty of desertion, Private John Egan of Company A, 2nd New Hampshire. (At Yorktown, Egan procured a Confederate uniform and attempted to make his way to enemy lines. A scout stopped him and returned him to his regiment.)


On April 15, 1864, both Egan and Holt faced death by firing squad . The execution took place on a bluff overlooking the York River, just one mile east of Yorktown. According to the 2nd New Hampshire’s regimental historian, Martin Haynes, General Wistar ordered a battery of artillery to point its loaded cannon at the regiment to prevent the men from mutinying. As Haynes remembered, “No words can tell how keenly the proud old men of the proud old Second felt the disgrace of the position.” He continued:


The provost marshal read the findings of the court and the sentence, when the firing party of twelve men advanced and took position a few feet in front of the coffins. The prisoners removed their coats, and knelt upon the grass while the priest performed the holy offices of the church. Arising, they shook hands with the provost marshal and the priest. Their eyes were bandaged and their wrists tied with white handkerchiefs. Then they were led to and seated upon their coffins, facing the executioners. The marshal raised his hand, and his men brought their pieces to a ‘ready;’ again, and the guns sprang to the shoulder; a third time, and the volley rang out. Two or three bullets were heard singing out over the river, and Egin [sic] and Holt fell back across their coffins. After a short time the bodies were examined by surgeons, who declared life extinct, when all the troops were filed past the bodies and back to their camps.


One of the officers who had sentenced the two men, Captain George W. Gordon, noted in his journal, “We marched back to camp blue as whetstones and not a little mad for such measures are necessary to keep men with the commands to which they belong. It is rather hard but fair.” 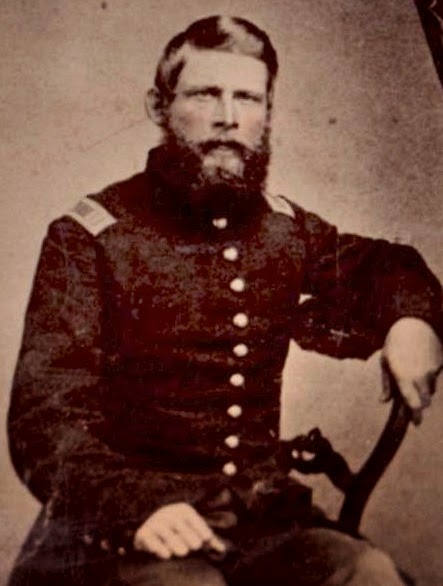 (Capt. George W. Gordon, 2nd New Hampshire Volunteers, served on the court. His journal revealed a strong opinion. In his mind, the deserters needed to die.)

After the execution of Holt and Egan, McDonald and Scott stood trial before the exact same court. Predictably, it found both men guilty and sentenced them to die. On April 25, General Wistar signed the death warrant:


The proceedings, findings, and sentences of the Court having been approved by Brigadier General I. J. Wistar, the officer convening the court, and forwarded to the Major General Commanding Department, have been by him confirmed and ordered to be executed.


The prisoners having been turned over by the Brigadier General Commanding to the Colonel Commanding this Brigade for execution: Private Owen McDonough [sic] Co. “K” Second [sic] New Hampshire Volunteers and Private James Scott Co. “G” Second [sic] New Hampshire Volunteers, will be shot to death with musketry, on the plain, below Fort Magruder, between the hours of 4 and 5 P.M. tomorrow 29th instant, in the presence of the Brigade.


The Brigade line will be formed at the place mentioned at a quarter before 4 o’clock P.M. at which time Commanders of the regiments will have their commands promptly on the ground.


Once again, Wistar’s brigade formed to witness a double-execution. This time, it stood at Fort Magruder, near Williamsburg. Adjutant Asa Bartlett, the judge advocate, later described this execution:


This was the first time that the Twelfth had ever witnessed an execution of the extreme penalty of military law, and the scene is still quite vivid in the minds of some who saw it. The spot having been selected and two graves dug, the regiments of the brigade are marched out at the hour appointed and formed into three sides of a hollow square, facing inward, with the newly-dug graves in the middle of the open side. Soon the “mark time” beat of the muffled drum is heard, and the condemned men, riding on their rough-made coffins, and guarded by twelve soldiers, selected from the Second Regiment, as executioners, slowly approach the square, and entering at one end of the open side, are driven round the whole distance of the other three sides, close in front of the lines. As they pass along, their countenances are closely scanned by every soldier, eager to read therefrom the emotions of the soul within. One of them, with downcast, sorrowful gaze, looks as if he realizes his situation, and that the woeful sorrow for the past, that has brought him here, is nearly equal to the dread of the terrible present that is now before him. The other acts more like one riding to a circus than [to] his own grave. A brutish grin is on his face, accompanied with an indifference of demeanor that seems half real and half affected. The teams are halted in front of the graves, beside which the coffins are placed, and the victims, dismounting from the cart, remain standing while the provost martial reads the death warrant and a prayer is made by the chaplain. They are next seated upon their coffins, their caps removed (the heedless one, bound to die game, taking his off himself and throwing it for some distance), their eyes bandaged with handkerchiefs, and now the dreadful moment of death-waiting suspense has arrived. The provost steps to one side a few paces, raises his hand, and twelve muskets instantly come to a “ready”; a little higher the hand, and the muskets are aimed and waiting; his hand drops, and Owen McDonald and James Scott fall over their coffins into eternity.


Captain Gordon, a member of the court who had asked for the death sentence, again remarked in his journal:  “We are getting a pretty hard name for a court. Well we have got four of them shot and more are deserving of being shot if I am judge.”


Sometime that summer, a Union officer, Captain John McMurray, visited Fort Monroe. There, he encountered a friend of his, a lieutenant from the 2nd New Hampshire who had served on the courts-martial of the four deserters and who had survived the Battle of Cold Harbor. McMurray asked the lieutenant what had happened to Gordon and Smith. The lieutenant replied, “Both were shot to death with musketry,” a derisive reply meant to make the June 3 attack at Cold Harbor appear equivalent to a death sentence. McMurray later recalled, “A pang of genuine sorrow for their death pierced my heart. Often since, when I have thought of them, and reflected upon their death, these two sentences have come into my mind: ‘Blessed are the merciful, for they shall obtain mercy,’ and ‘Vengeance is mine, I will pay saith the Lord.’” 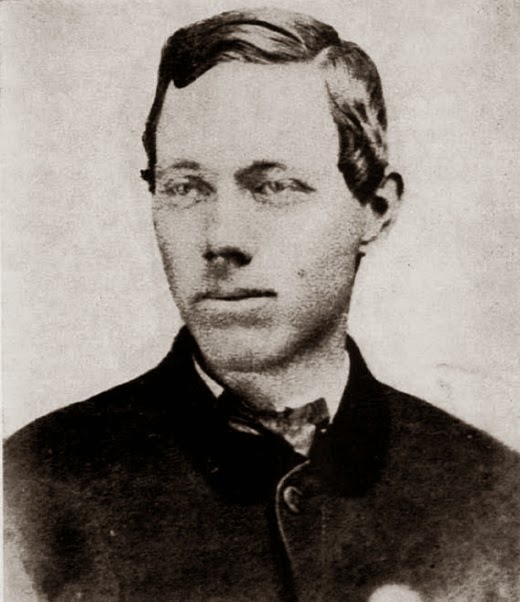 (Capt. John McMurray, 6th U.S.C.I., believed the merciless members of the court received their own style of justice at Cold Harbor.)


I think this tale is powerful enough as it is; I need not say much more about it. But let me conclude with this: the Civil War was, at its simplest, just an interlocking web of death sentences. I think the soldiers of 2nd and 12th New Hampshire understood this too well. 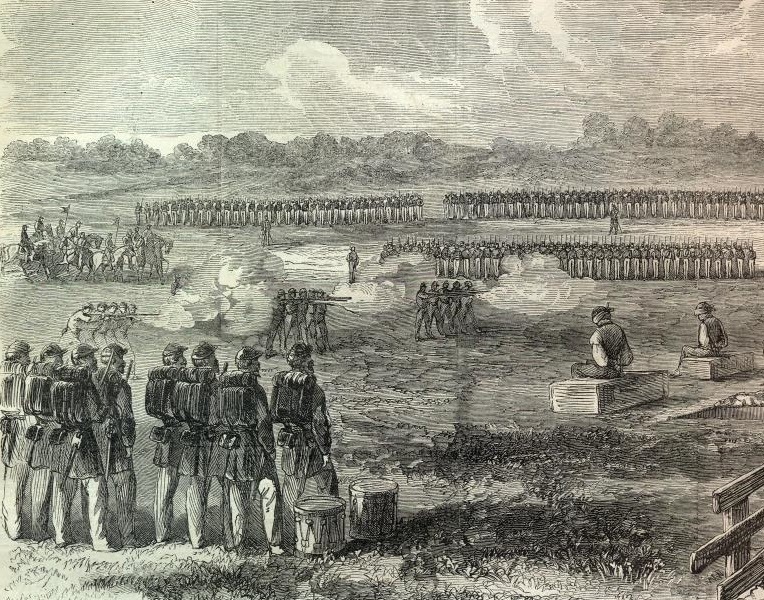 (There are no known images that depict the executions of Holt, Egan, Scott, and McDonald. Probably, they looked something like this Harper's Weekly sketch.)